The problem is rooted in the persistent exclusion of immigrants from Oregon’s civil society. This exclusion causes the destabilization of families by family separations, deportations, and raids. The system relies on unjust and unfair procedures and an unrelenting assault on immigrant communities that perpetuates and instills fear and distrust. 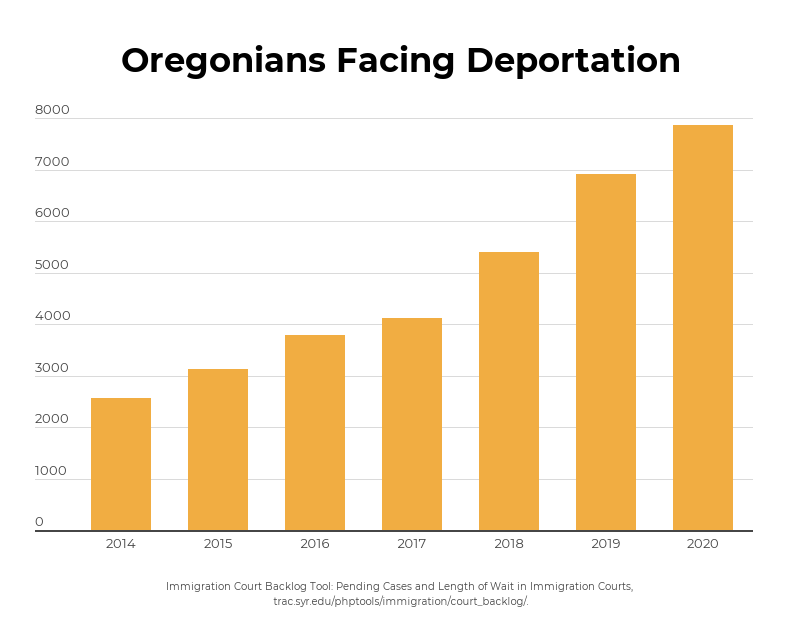 Legal defense for those facing deportation proceedings remains an urgent need throughout Oregon.  In a 2018 survey conducted by the Oregon Law Foundation, 70% of participants identified immigration as a civil legal issue that had a very or extremely negative effect on their lives. Unlike in criminal proceedings, respondents appearing before the U.S. immigration court do not have the right to court-appointed counsel. Meanwhile, the federal government is always represented by an attorney.  Those going before the Portland Immigration Court without legal representation are nearly five-and-a-half times more likely to lose their cases and be ordered deported from the United States; many to situations where their lives are in immediate danger.

The Universal Representation program is—in the most literal and visceral sense—an investment in equity for Oregon. Our beautiful state of Oregon is an immigrant state. Now, more than ever, our collective prosperity is integrated with the collective achievements of our immigrant community. Immigrant Oregonians are deeply woven into the fabric of our state and contribute extensively to our collective prosperity as workers, business owners, taxpayers, and neighbors. One in ten Oregon residents is an immigrant, totaling almost 400,000 foreign-born Oregonians.

This collective prosperity is threatened by an immigration system that is stacked against the individual, in which Oregonians must defend themselves alone against a federal attorney trained to pursue exile. Nearly 1,400 Oregonians are currently facing deportation proceedings in immigration court without legal representation. Without an attorney, these Oregonians are far less likely to succeed in preventing family separation. In fact, represented immigrants in Portland Immigration Court are nearly three-and-a-half times more likely to win relief from deportation than their unrepresented counterparts.

At current rates, about 80 percent of unrepresented Oregonians whose deportation cases are decided on the merits at the Portland Immigration Court will be ordered deported. Further, unrepresented immigrants rarely even fight their cases because the system is set up to fail them. Thousands of Oregon families are needlessly fractured by deportation simply because a family member has no access to legal representation.This disruption to immigrant communities has enormous consequences for our shared prosperity. Employers must bear the high turnover-related costs of hiring, training, and lost productivity when their employees are unnecessarily detained and deported. State and local governments are burdened when a family’s primary wage earner or caregiver is deported, which can increase housing and food insecurity, reliance on public health and well-being programs for the children of deported parents, and the danger of children being placed into the foster care system. Students who suffer the deportation of a parent are at higher risk of dropping out of school, limiting their futures and their potential to contribute to the economic and social enrichment of Oregon communities. In sum, the extreme psychological, physical, and financial harm to immigrant families torn apart by deportation without due process impacts all Oregonians.